Good afternoon, it is 19th June 2020 and here is your economic and market update from BlackBee.

Today we focus on: 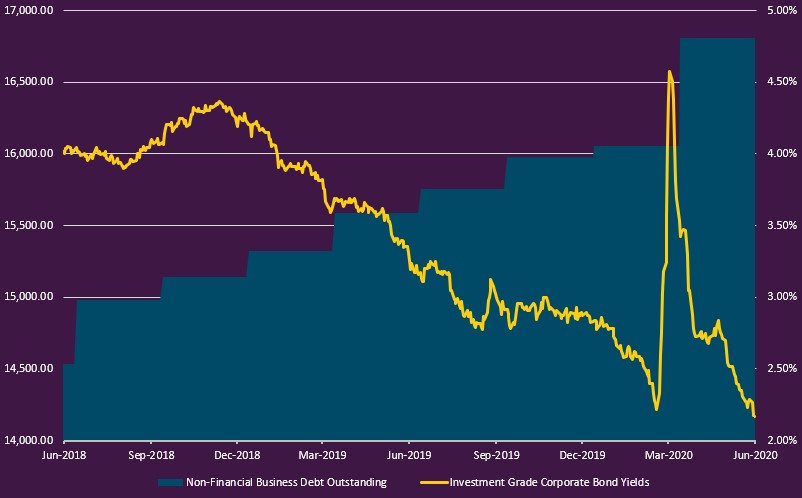 Since the crisis began, to support the credit market, the FED has so far purchased approximately $5.5 billion worth of ETFs that buy corporate bonds. The move from the FED has come under some criticism that it is unnecessary since the bond market has been performing relatively well as of recent weeks.

Yields have continued to drop at a consistent and stable rate as investors pour funds into the market, reassured by the knowledge the FED is supporting it.

In response to the criticism, FED Chair Jerome Powell argued that it was a matter of credibility that the FED follows through with what it promises despite already purchasing ETFs, a promise that has led to an inflow of funds to credit markets. However, this latest move could be a sign that the FED is worried about the economy and is essentially a nationalisation of bond markets.

On 20th March yields on investment-grade bonds stood at nearly 4.6%. As of yesterday yields were at 2.17%.

The inflow of funds from investors has seen credit spreads keep tight and borrowing costs at all-time lows for companies – vital in a time where many companies revenues have dried up. As expected, many companies have been in need of funding to weather the downturn.

With borrowing costs so low, some companies have been dipping into the credit market just to shore up their cash balances in case it is needed. The inflow of funds into the credit market comes despite only 49 credit rating upgrades in Q2 2020 compared to 942 downgrades. This gives an extremely low upgrade/downgrade ratio of 0.05. In Q4 2019 this ratio stood at 0.48.

Find out more about where we invest.

This website uses cookies to improve your experience while you navigate through the website. Out of these cookies, the cookies that are categorized as necessary are stored on your browser as they are essential for the working of basic functionalities of the website. We also use third-party cookies that help us analyze and understand how you use this website. These cookies will be stored in your browser only with your consent. You also have the option to opt-out of these cookies. But opting out of some of these cookies may have an effect on your browsing experience.
Necessary Always Enabled
Necessary cookies are absolutely essential for the website to function properly. This category only includes cookies that ensures basic functionalities and security features of the website. These cookies do not store any personal information.
Non-necessary
Any cookies that may not be particularly necessary for the website to function and is used specifically to collect user personal data via analytics, ads, other embedded contents are termed as non-necessary cookies. It is mandatory to procure user consent prior to running these cookies on your website.
SAVE & ACCEPT